We’ve been having lots of fun with eggs around here, painting them, experimenting with them, and of course eating them! So, when Tinkerlab announced that their creative kids challenge was going to center around eggs I knew it was something the kids would love to take part in! Each family chooses an egg themed activity that is to be child led, so this morning I set out the materials and let the kids get to work designing their own containers to keep an egg safe while being dropped from a height. 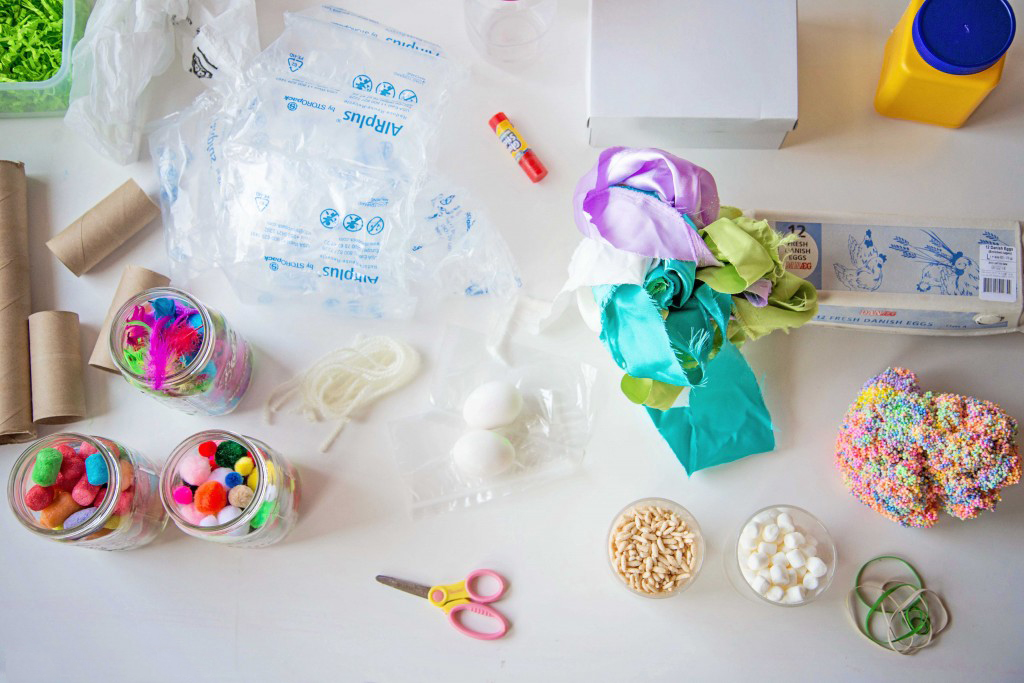 I stepped back and let them get to work designing their own egg safety vehicles! The only thing I did insist on was that the eggs needed to be in a plastic baggy in case of failure! 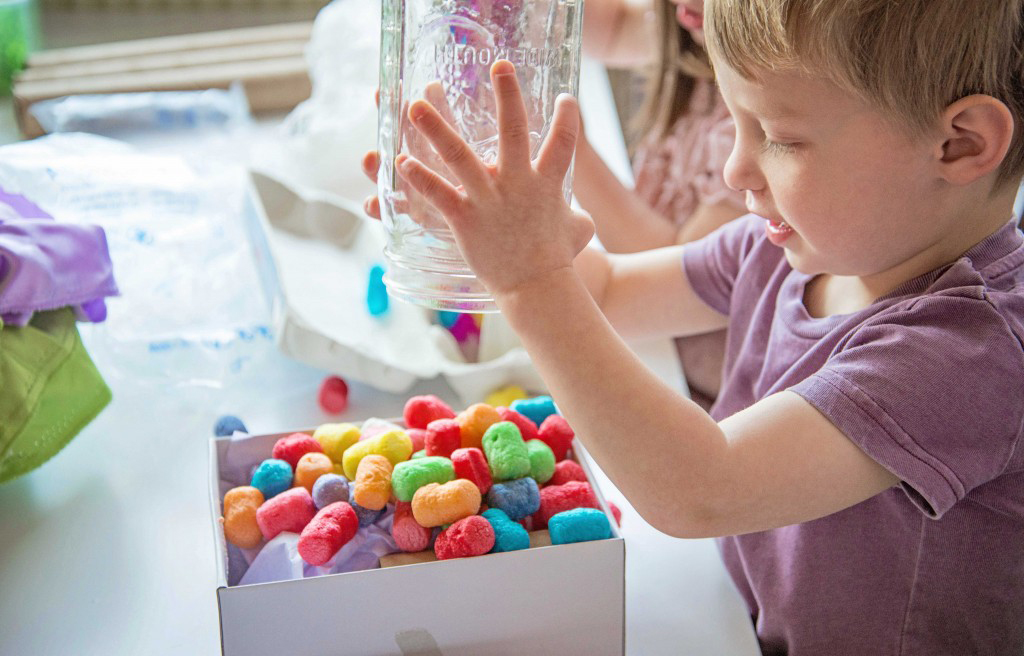 Gray grabbed a box and began dumping everything in! Once it was full he stuck his egg on top and taped the box shut.

Aurora went for the egg carton and filled it up with feathers before placing her egg inside.

We set up a ladder in the living room to test out their creations. From a height of about five feet the boxes fell and then we opened them back up to inspect the contents… 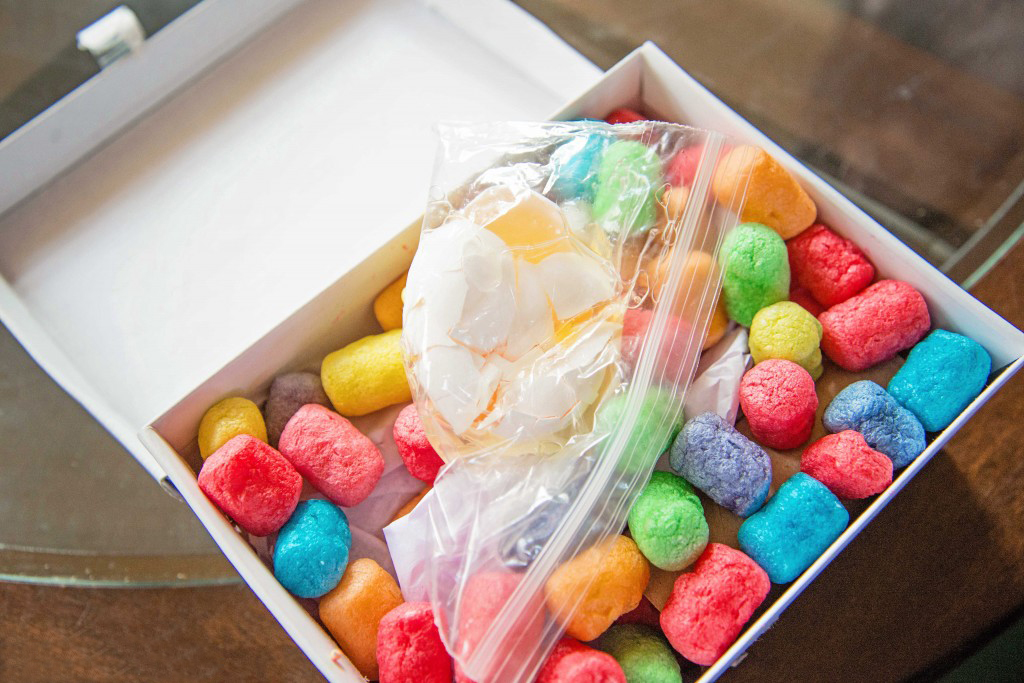 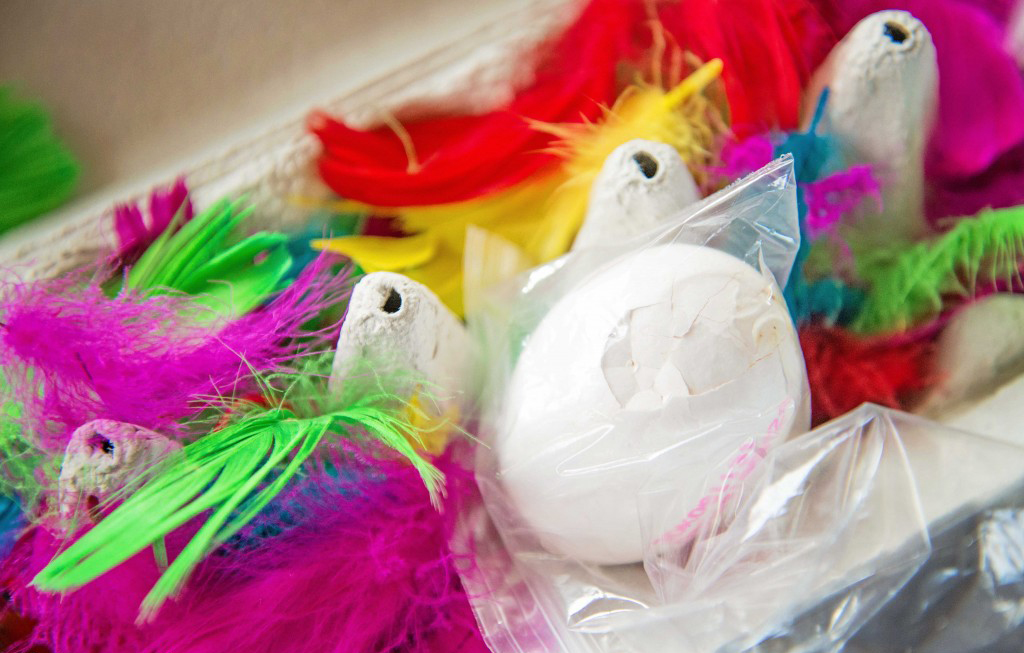 Splat went the eggs! We talked about possible problems with the construction, like the fact that Gray put his egg on top of the box instead of in the middle so it wasn’t protected on top. Aurora learned that feathers weren’t the best at absorbing the shock of the fall. So, it was back to the drawing board! 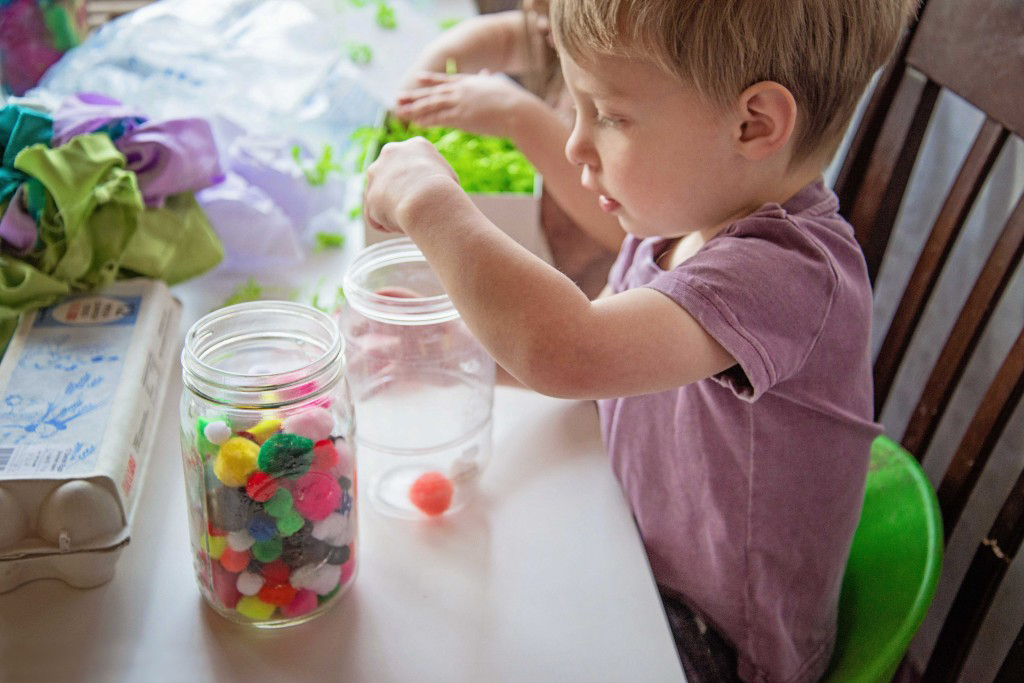 This time, Gray went for the pom poms. He filled a plastic container with them, then his egg, and topped it off with marshmallows! 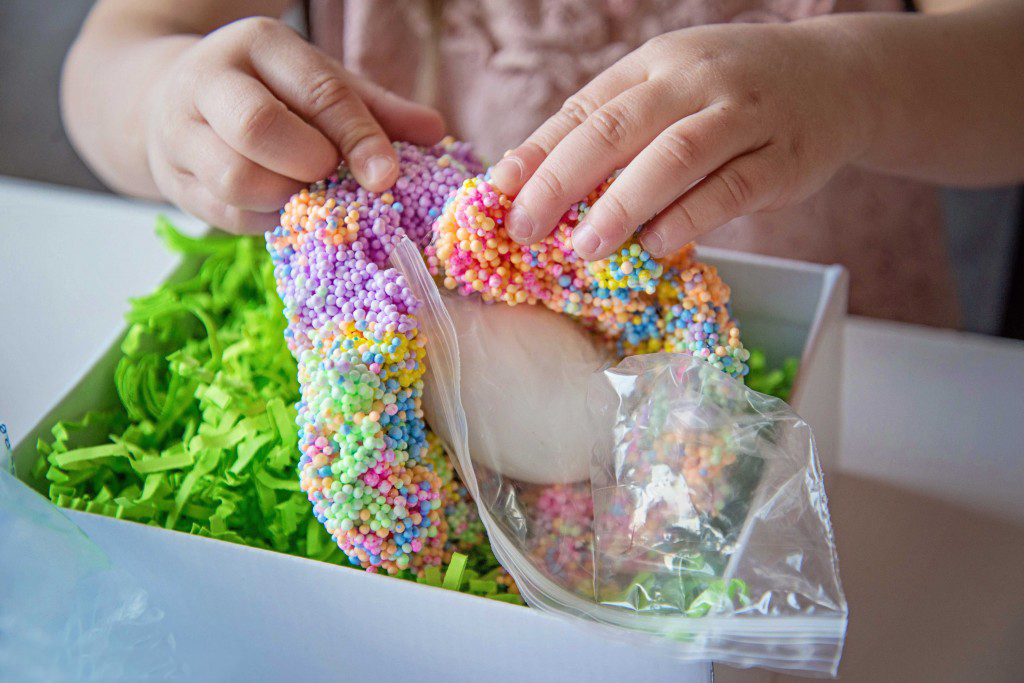 Aurora decided to give the shoe box a try, she filled it to the brim with crinkled paper and then wrapped her egg in floam before placing it inside. We were ready for the second drop!

Down they fell! Upon inspection we found two perfectly unharmed eggs! 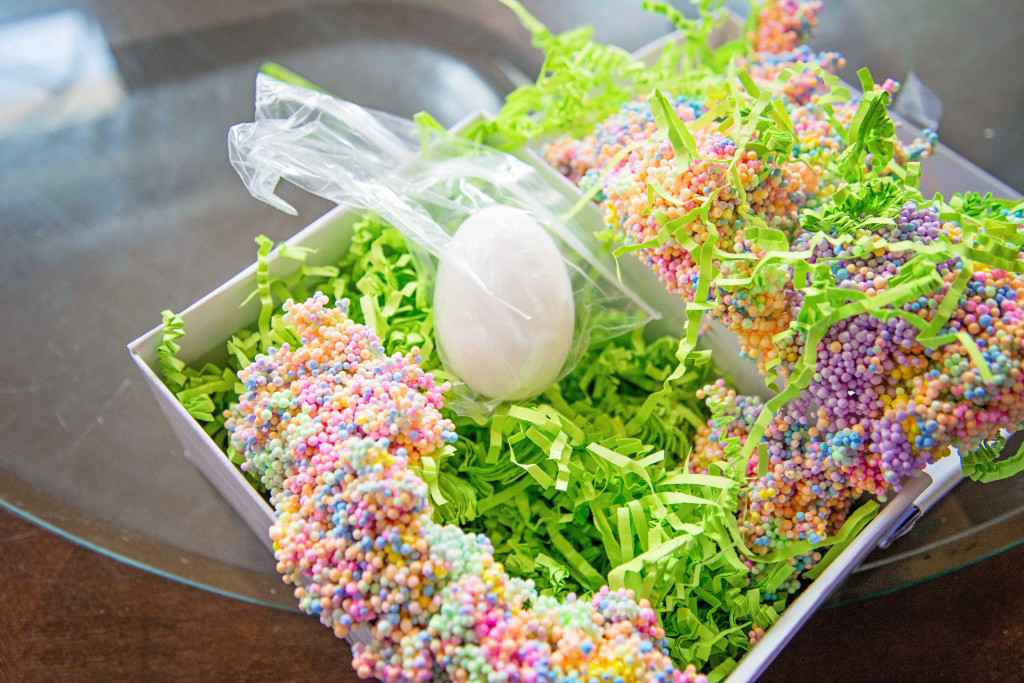 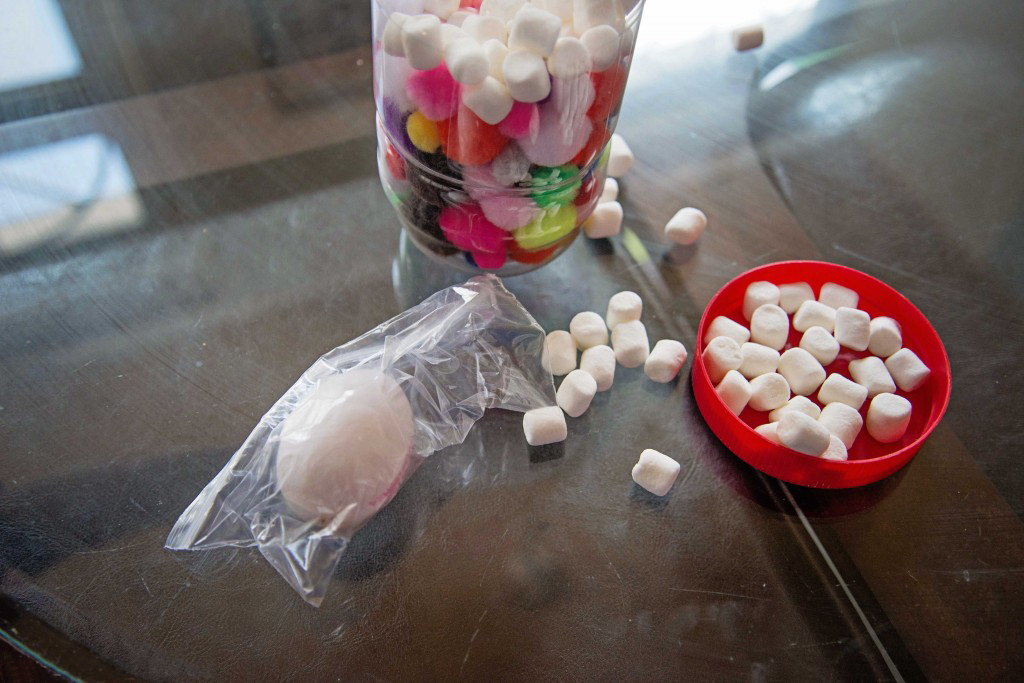 Success! They were so proud of themselves, and I was too! It was a great child led experiment to practice trial and error and learn a few physics concepts along the way! I tried to apply what we’d learned to other life experiences. We discussed why it’s important to always sit in a car seat because it helps absorb the shock in an accident and it keeps kids safe much like the soft materials protected the egg. Besides absorbing the impact of the collision, another way to survive is to fall slower. We didn’t build one, but the concept of a parachute would be a great tie in to this lesson!

This was a great experiment for my preschoolers to tackle on their own, they learned quite a bit and felt really confident as they figured things out through trial and error, they were thrilled when they succeeded on their own!

For more fun kids experiments, be sure to check out my STEM (science, technology, engineering, math) board on Pinterest! And, pop over to Tinkerlab to see some of the other child led egg activities that bloggers have been putting together this month!

This post may contain affiliate links. Please refer to our affiliate disclosure for more information.