We’ve been dreaming about summer, running through the sprinkler, road trips to the beach, and lots of lazy days at the pool. Can you tell we love water? Since it’s too cold for those activities yet, I’ve been trying to come up with lots of water play ideas for the kids and our daily tot trays have been quite the source of inspiration! Most days I set up some sort of learning activity for each kid on their own tray that they can play with by themselves. This allows me to get a few chores done in the morning without the kids underfoot, and they’re happily engaged at the same time!

Most of the trays we’ve done so far have involved playing with one of the toys shown[best toys tot trays]here, but we’re branching out a little bit and I’m starting to make up a few of my own trays or try some others that I’ve seen on Pinterest. This week we focused on water transfer activities using different methods to move water from one bowl or apparatus to another. They were all really simple to set up and kept the kids busy for quite awhile!

The kid’s favorite by far was the spray bottle, I filled it up with about half a cup of water and let them squirt it in the bowl (or each other or in the air as it did turn in to a bit of a water fight!) Even with the unauthorized squirting, with only a few ounces of water in the bottle there wasn’t much of a mess to clean up when they were done, and they had so much fun! Also, since they’re building hand strength with this activity every time they squeeze the lever, it’s really like I’m training them to one day help me clean the house… that’s always a plus!

We’ve played with eye droppers a bit before, like when we made a coffee dough volcano or coffee filter flowers, but this was the first time I let them use a turkey baster! It was fun for them to use a larger version of an apparatus they were already familiar with. It allowed us to make lots of comparisons about the speed at which they were able to transfer water!

We used a baby wipe to practice using an absorbent material to transfer water. A sponge or rag would also work well, I chose a baby wipe because it doesn’t hold a lot of water, and therefore makes less mess! The kids dipped it in the full bowl of water and run it out in the empty bowl several times until they had moved all of the liquid.

Ladling is a great toddler and preschool skill. Harder than using a regular spoon, they have to figure out how to tilt the ladle to empty the water, while still maintaining proper aim… It took my two year old a bit of practice, but that’s what the trays are for, they catch all of the water spills and make clean up a breeze!

Pouring and dumping is always a fun past time in our house, I gave the kids three different containers to transfer the water between, and pour and dump they did! Over and over and over… 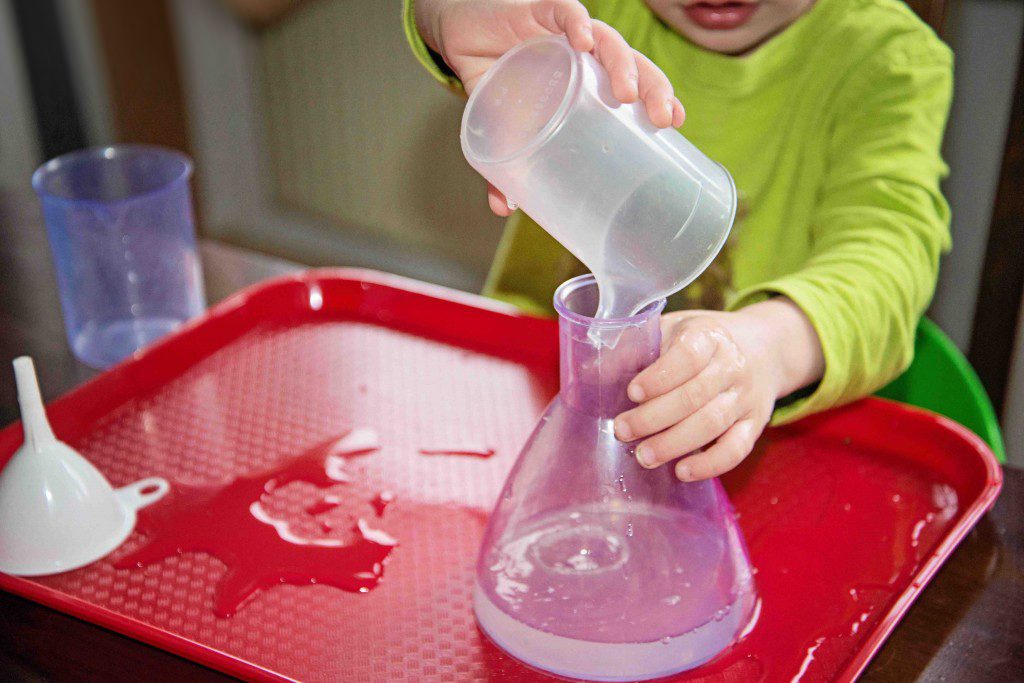 This post may contain affiliate links. Please refer to our affiliate disclosure for more information.